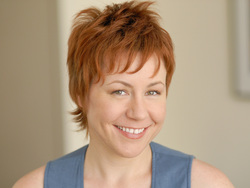 It was during one of her first visits as a hospice worker that Taren Sterry realized something significant. “His name was Don,” says Sterry, as she recalls her patient. “We were sitting at his kitchen table. And I had a very clear thought that none of the books or studying or papers that I had read up until that point had prepared me for the job that I was there to do, which was simply to be present."

The visit was just one of many during a six-month ethnographic field study as part of the community studies major at UCSC. Inspired by a course taught by Wendy Martyna about death and dying, Sterry chose to work with terminally ill patients and their families. “After about three classes I knew that was what I wanted to study,” she says. “I loved stories, I still do. I love learning about people’s lives. I love hearing about how people make meaning out of their lives.”

About four years later, while living and doing hospice work in New York, Sterry took a solo writing workshop at an improv theater. “I had already written my thesis, so I had 500 pages of ethnographic field notes and there were all these juicy stories about patients,” she says. She would go on to write her one-woman play, “180 Days,” about her first six months working in hospice as a UCSC student in 2001-2002. The show has been running in New York City and touring the country since 2008, and makes its way to Santa Cruz on Feb. 16 at Kuumbwa Jazz.

The comedy-drama affords Sterry the opportunity to portray multiple characters, a challenge she enjoys. “The challenge for the solo actor, if I’m switching from character to character in a conversation, is to be present as that character in that moment, and then to switch to be that other character in that moment.” Among those characters, she also plays herself in both present-day and 23-year-old incarnations. “I have a lot of compassion for her,” she says of her younger self. “I think I’ve changed a lot since then and see the world very differently now, but there are still things about that version of me that I can relate to.”

The experiences chronicled in “180 Days” could not have happened at a better point in Sterry’s coming-of-age. “I learned a lot of really hard and valuable lessons at a young age,” she says. “I’m glad that I learned some really tough stuff at a younger age even though it was really hard at the time. I’m reaping the benefits of those lessons in my life now.”

Now the manager of volunteer services for the Visiting Nurse Service Of New York Hospice Care, Sterry returns to Santa Cruz less than a year after her alma mater suspended her major indefinitely. She remains hopeful that the community studies program can be restored or improved in the future, and is looking forward to coming back. “Bringing it back to Santa Cruz is a way that the show is coming really full circle,” she says. “That’s where it all started.”

For those who are apprehensive about the potentially grim subject matter of “180 Days,” its writer/star sees it as quite the opposite. “The idea that hospice is depressing is a myth,” says Sterry, who is writing a follow-up about her last 10 years working in hospice. “There’s nothing better than being able to help people. It’s an amazing profession.” Sterry’s show, about the importance and fulfillment of said profession, looks to capture the spirit of that work. “I don’t sugarcoat any of the sadness,” she says. “But I also don’t dwell in it.”

"The people we meet in Taren Sterry's one woman show, 180 Days--a young idealistic Taren, her family and her Hospice patients--are all compelling characters. As a long-time Hospice professional, I found 180 Days to be powerful, poignant, fresh and funny. The show captures life and death in a very real way and engages non-hospice audience members as well those of us who do the work. 180 Days is a creative celebration of life. Go See It!"
--Jeanne Dennis, Vice President for VNSNY Hospice Care

"It is pretty hard for me and probably lots of other hospice workers to relate hospice experiences to others and feel that we have painted a meaningful picture. I think that since Taren is an artist and has the ability to tell her whole story with humor, understanding and perspective she is able to do what the rest of us find so difficult.  This is a very clear example to me of the role of the artist in this world."
--Gilbert Oakley, Hospice Nurse

"In 180 Days, Taren Sterry weaves a tale of compassion and calling with her amazing gifts of wit, humor and pathos. With poignancy and a profound respect for death, Taren is a gifted and hilarious storyteller."
--Ann Megyas, Zen Chaplain